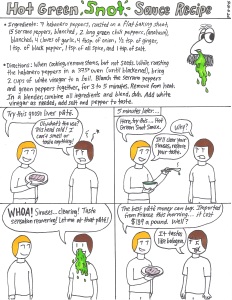 This is the second sauce comic I have created for my friend, Joe Wilson who tells great stories that can be seen over here on Playshorts. He also created Vampire Mob which can be seen here Vmob and is also available in graphic novel form. The sauce recipe is my dad’s. The comic is based on an actual situation that happened before I was born. It was my mom who said the now infamous line, “it tastes like bologna” when offered expensive pâté by a snooty neighbor.  My dad claims this was the last time he peed his pants. That may be debatable. You can follow Joe on Twitter (@joewilsontv, @VampireMob, and @PLshorts). You can follow my mom to the Oscar Mayer section of the pâté shop. FT 😃