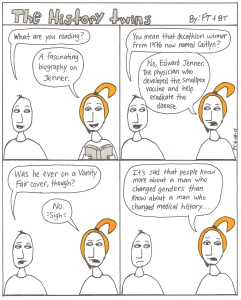 The travel PSA’s have been a really fun project, but I wanted to do a history comic arc since it has been quite a while. Now is an opportune time with Bruce/Caitlyn Jenner garnering such media attention that I wanted to talk about Edward…….the forgotten Jenner. One was on a Wheaties box, the other is considered the father of immunology. One was in the Olympics, the other in the annals of the history of medicine. Who was more important? One I will make a comic arc about, one I won’t. You decide. FT 😛